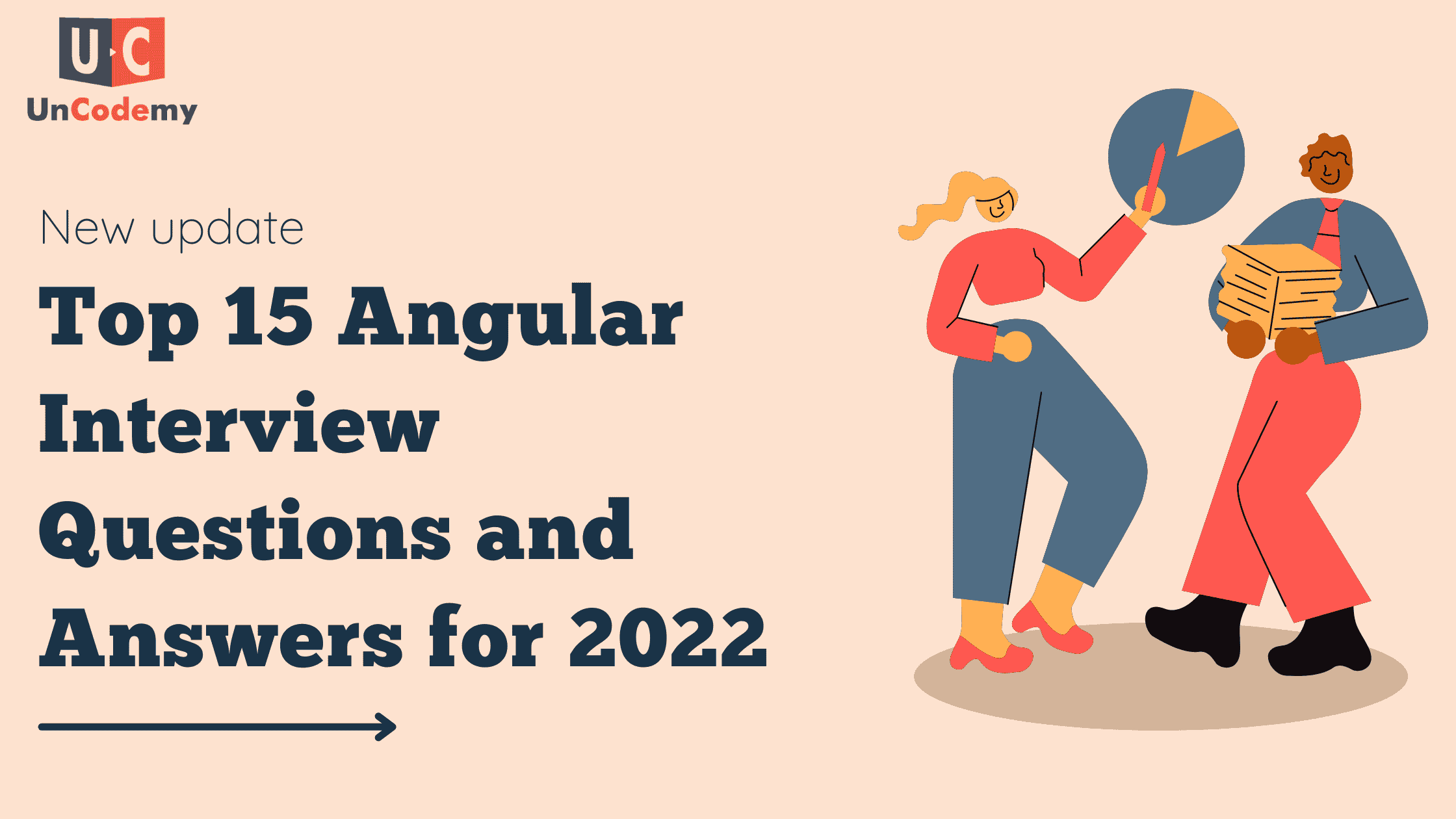 Ques.1 What is Angular? Why was it introduced?

Ans.1 Angular was initiated to develop Single Page Applications. Angular is an open-source front-end Java-Script web framework, wholly written in Typescript. It utilizes HTML syntax to convey your application’s elements clearly.  It is one of the vastly famous JavaScript frameworks that is largely maintained by Google. It gives a platform for the manageable development of web-based applications and empowers front-end developers in curating cross-platform applications. It blends powerful features like declarative templates, an end to end tooling, dependency injection, and numerous other best practices that smoothens the advancement path.

Que.2 What are the advantages of using Angular?

Ans.2 An extraordinary windfalls of utilizing the Angular framework are listed below:

Ans.3 Data binding is a manifestation that authorizes any internet user to manipulate Web page elements utilizing a Web browser. It utilizes dynamic HTML and does not need complex scripting or programming. We practice data binding in web pages that comprise interactive elements such as forms, calculators, tutorials, and games. The incremental display of a webpage makes data binding convenient when pages have a massive amount of data.

Angular utilizes two-way binding. Any modifications made to the user interface are recognized in the corresponding model state. Contrarily, any transformations in the model state are expressed in the UI state. This authorizes the framework to relate the DOM to the Model data via the controller. However, this procedure affects performance since every change in the DOM has to be tracked.

Ques.4 What are Angular expressions?

Ques.5 What are templates in Angular?

Ans.5 Templates in Angular are composed of HTML that comprises Angular-specific elements and attributes. These templates are integrated with information coming from the model and controller which are further rendered to provide a dynamic view to the user.

Ques.6 In Angular what is string interpolation?

Ans.6 String interpolation in Angular is a special syntax that utilizes template expressions within double curly {{ }} braces for displaying the component data. It is also known as mustache syntax. The JavaScript expressions are comprised within the curly braces to be executed by Angular and the relative output is then entrenched into the HTML code. These expressions are usually updated and registered like watches, as a part of the digest cycle.

Ques.7 What are Directives in Angular?

Ans.7 Directives are attributes that authorize the user to write new HTML syntax specific to their applications. They enforce whenever the Angular compiler discovers them in the DOM. Angular supports three types of directives.

Ans.8 Modules, components, and services are classes that use decorators. These decorators mark their type and provide metadata that tells Angular how to use them. The metadata for a component class associates it with a template that defines a view.

We have one or more components at the heart of every Angular App. In fact, in the real world, we establish complicated apps that contain tens of components. The data, HTML markup, and logic for a view behind the perspective are all encapsulated in a Component. Component-based design is embraced by Angular, allowing us to work on smaller, more maintainable portions that may also be reused in different places.
Every application must have at least one component, referred to as the app component or root component. Starting with the app component, a real-world Angular app is effectively a tree of components.

A module is a container that clenches a collection of connected components. Every angular app comprises at least one module, which we pertain to as the app module. We may want to divide our modules into smaller, more maintainable modules as our application expands. As the program broadens, we will require to subdivide our app module into smaller modules, each of which will be responsible for a distinct section. It has components that are connected.

Angular services are singleton objects that are instantiated only once during an application’s lifetime. They comprise methods for preserving data during the life of an application, i.e., data is not refreshed and is always available.

Ques.9 State some differences between Angular 11 and Angular 12

Ques.10 What are Promises and Observables in Angular?

Ans.10 While both the concepts deal with Asynchronous events in Angular, Promises handle one such event at a time while observables handle a sequence of events over some time.

Promises – They emit a single value at a time. They execute immediately after creation and are not cancellable. They are Push errors to the child’s promises.

Observables – They are only executed when subscribed to them using the subscribe() method. They emit multiple values over a period of time. They help perform operations like for Each, filter, and retry, among others. They deliver errors to the subscribers. When the unsubscribe() method is called, the listener stops receiving further values.

Ans.11 AOT stands for Angular Ahead-of-Time compiler. It is utilized for pre-compiling the application components and along with their templates during the build process. Angular applications which are amassed with AOT have a smaller launching time. Also, elements of these applications can enforce immediately, without expecting any client-side compilation. Templates in these applications are embedded as code within their components. It lessens the desire for downloading the Angular compiler which redeems you from a cumbersome task. AOT compiler can discard the unused directives which are further thrown out using a tree-shaking tool.

Ans.12 jQlite also known as jQuery lite is a subset of jQuery and comprises all its features. It is packaged within Angular, by default. It assists Angular to manipulate the DOM in a way that is compatible with cross-browser. jQLite basically implements only the most commonly preferred functionality which results in having a small footprint.

Ques.13 Explain the process of the digest cycle in Angular?

Ans.13 The digest cycle in Angular is a process of regulating the watchlist for maintaining a track of modifications in the value of the watch variable. In each digest cycle, Angular correlates the previous and the new version of the scope model values. Generally, this process is accelerated implicitly but you can activate it manually as well by using $apply().

Ques.14 What is bootstrapping in Angular?

Ans.14 Bootstrapping in Angular is nothing but initializing or starting the Angular app. Angular supports automatic and manual bootstrapping.

Ques.15 What are Angular building blocks?

Ans.15 The main building blocks for Angular are modules, components, templates, metadata, data binding, directives, services, and dependency injection. We will be looking at it in a while. Angular does not have a concept of “scope” or controllers; instead, it uses a hierarchy of components as its main architectural concept.